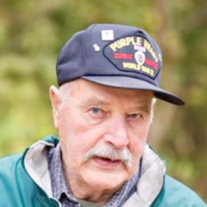 Alex Kaszynski Sr 93 of Peru. Died March 2, 2019, in his home surrounded by his family. Mass of Christian Burial will be 1:00 PM Saturday, March 9, 2019, at St Valentine Church. Monsignor Richard Soseman will officiate. The Peru Veterans Memorial Group will conduct full military rites following the services at the Church. Cremation rites will take place following the services. Private Burial will be at a later date in St Valentine Cemetery. Visitation will be Saturday from 10:00 AM till 12:30 PM in Ptak Funeral Home. Alex was born April 11, 1925, in La Salle to Alex and Mary (Owiecki) Kaszynski. He graduated from St Valentine Grade School and La Salle Peru High School. He married Carrie Jean Sadnick February 2, 1963, in St Valentine Church. Alex served in the Army in WW II. He was wounded in Luzon Island in the Philippines February 17, 1945, receiving a Purple Heart. He along with his six brothers proudly served their country. This April a portion of US Rt 6 Highway from Mary Street in Spring Valley to Harrison Street in Peru will be renamed the Kaszynski Brother’s Memorial Highway in their honor. Alex worked for the City of Peru electric department for 43 years. He was a member of St Valentine Church, La Chateau (40 &8) Club in Annawan, Rawson Lake in Bureau. He was a charter member of Peru Municipal Credit Union. Wings shooters Duck Club and a charter member of the Peru Sportsman Club. He played Accordion and the organ at Bill’s Roller Rink in Peru. He also played the organ as a summer job in Michigan City, IN. He loved to cut and split wood, fish, camp, Deer and Duck Hunt. He deer hunted up till he was 91. Alex was an avid Cub fan finally enjoyed watching them winning the World Series. He was known for his joke telling and his saying “Nothing Stays the Same”. Alex is survived by his daughter Mary (JJ) Ellerbrock of Peru, his sons Alex (Andrea) Kaszynski Jr of Peru and Kye (Kyla Pflibsen) Kaszynski of Peru. His Grandchildren Ashley, Carrie, Hunter and Cade Kaszynski, Jakob and Kylie Ellerbrock, Ken and Keith Schuster. He is also survived by his brother Chester Kaszynski of Peru and his faithful companion Lucky the cat. He was preceded in death by his wife Carrie Jean in 2016 and his sister Elizabeth Snell and six brothers Casimir, Thaddeus, Florian, Richard, Bernard, and Roman and 100’s of deer, duck, and geese.
To order memorial trees or send flowers to the family in memory of Alex Kaszynski, please visit our flower store.