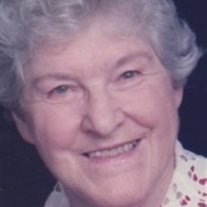 Claire M. Stungis, 96, formerly of LaSalle, died at 8:20 a.m. March 31, 2014, at her home in Overland Park, Kan. Cremation rites will be accorded. A private memorial mass will be celebrated at Holy Spirit Catholic Church in Overland Park; and a Memorial mass is set for 10 a.m. Saturday, August 16, at St. Valentine Church in Peru Rev. William Gardner will officiate. Burial of the cremains will follow in St. Valentine Cemetery. Ptak Funeral Home is assisting the family with arrangements. Claire was born August 7, 1917, in Peru to Stanley and Stella (Mackowiak) Michalowski. She married Alex G. Stungis on Nov. 13, 1944, in Chicago. He preceded her in death on March 20, 2003. Claire spent her childhood in Peru and later moved to Chicago and then to Prospect Heights, Ill. She was employed in the store office for many years at the former Wieboldt’s department store in Mount Prospect, Ill. After their retirement in 1978, she and Alex moved to LaSalle, where they resided on Haley Street until 2003. Claire was active in the Catholic War Veterans St. Mary’s 883, and was an avid gardener, expert seamstress and crochet artist and an excellent cook. She was a member of St. Valentine Church. She loved entertaining her family and friends at home. After the death of her husband, she moved to Overland Park, Kan., where she enjoyed many activities with the family. She was dearly loved by her family and friends. She is survived by her daughter and son-in-law, Elaine and Michael Symanski of Overland Park, Kan.; her son and daughter-in-law, Mike and Carol Stungis of Middleburg, Fla.; five grandchildren, Kelli Murphy, Jenni Skube, Jeff Stungis, Adam Symanski and Julia Symanski; eight great-grandchildren; and several nieces and nephews. Memorial contributions may be made to the donor’s favorite charity
To order memorial trees or send flowers to the family in memory of Claire M. Stungis, please visit our flower store.