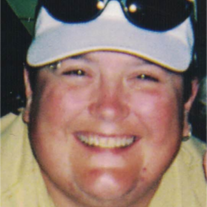 Doreen M."Doe" Ublish 49 of La Salle. Died May 24, 2018, in Kindred Hospital Peoria. Funeral services will be Wednesday 7:00 PM in the Ptak Funeral Home. Burial will be at a later date in Ladd Cemetery. Cremation rites will be accorded following the services. Visitation will be Wednesday at the funeral home from 5-7 PM. Doreen was born September 26, 1968, in Spring Valley to Donald and Norma (Orlandi) Ublish. She worked in the lawn care service and was a dispatcher for La Salle County Jail for many years. She was a 1986 graduate of La Salle-Peru Township High School. She was a member of the House of Praise Church in Peru. She participated in Karate, Tai-Chi, and Yoga and was a member of the Illinois Valley Hogs Motorcycle Club and played softball in La Salle Women's League for many years. Doreen is survived by her life partner Diane Novitski of La Salle. Her mother Norma (Alfred) Mansfield of Pontiac. 1 brother Michael (Becky) Ublish of Bloomington. Her 2 nieces Kayli and Jenna and her nephew Braden. She is also survived by her dog Izzy and her cat Kitty boy. Doreen was preceded in death by her father. Her paternal grandparents Dora and Michael Ublish and maternal grandparents Dino and Mary Orlandi. Her common-law in-laws Walter and Louise Novitski. in lieu of flowers, Memorials may be directed to the family. Shimkus Helmer Staab Funeral Home is in charge of arrangements.
To order memorial trees or send flowers to the family in memory of Doreen M. "Doe" Ublish, please visit our flower store.