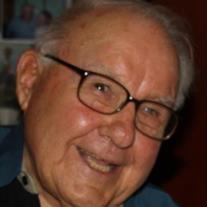 George Richard Weber, 87, Peru, IL, died early Monday morning, February 2, 2015. George died peacefully at Illinois Valley Community Hospital in Peru. He was a familiar face in the community, a popular teacher and coach, and a lovinghusband, father, and grandfather. Born August 8, 1927 in Bellwood, IL, to Nicholas and Marie (Gilson) Weber, George was the youngest of 7 children. His sisters played an important role in his life after his mother died when George was 13 years old and his father moved the family to rural Papineau, IL. George attended one year at Proviso East High School in Chicago and then finished at St. Anne High School in St. Anne, IL. At Illinois State University in Normal, IL, he earned his Bachelor’s and Master's Degrees and also attended UCLA for summer courses. It was at ISU that George met the love of his life, Rosemary Urbanowski from Peru. Besides studying and attending athletic events, the two spent memorable moments at Lucca Grill and the Pilgrim Restaurant. On March 14, 1952, George and Rose who married at St. Valentine’s Catholic Church in Peru celebrated 62 years of marriage. In the Army, George served both in Germany during WWII and in Korea. He served as a medic and was a referee for military football games. George taught and coached at Morgan Park Military Academy in Chicago, Mid- County High School inVarna, IL, and Farmer City High School. George moved to Peru to raise his four children and finish his career at La Salle-Peru Township High School in La Salle, IL. During his 36 years at LPHS George built a strong reputation as a fair, nurturing teacher and coach. Teaching History, P. E., Driver Ed. and coaching football, basketball, track, and golf resulted in many strong friendships with colleagues and students. Mr. Weber became the chair of the P.E. Department and later the director of the driver education program and varsity golf coach. Coach Weber, with the assistance of Fr. Kevin Gorman, established the on-going L-P - Saint Bede Invitational Golf Tournament for the two local high schools. He was an active member of the L-P High School Teachers’ Association and once served as president of this group. George also established evening adult Driver Ed. at Illinois Valley Community College in Oglesby, IL. George shared his sense of humor with friends of all ages on the golf course, at the bowling alley, around the card table, at the race track, or at many sporting events. Though he played all the area courses, he was a long-time member of Spring Creek Golf Course. He was proud of his Luxembourg heritage. George supported the Immanuel’s United Church of Christ in Papineau and also St. Valentine’s Catholic Church in Peru. He was a Cubs, Bears, Fighting Illini, and L-P Cavaliers fan. At all times in his life he enjoyed his family, especially having fun with 5 grandchildren and 44 nieces and nephews. George is survived by his wife Rose Marie (Urbanowski) of Peru, son Nicholas and Leigh (Swegle) of Rochelle, daughter Ann of Normal (Charlie Thomas of Bloomington), son John and Lisa (Gedraitis) of Bloomington, and son Richard and Jodi (Foster) of Peru, grandchildren Zachary Weber of Cambridge, MA, Joshua Weber of Madison, WI, Quincie, Parker, and Drake Weber of Peru, and sister Marie (August) Black of Morris, IL, and sisters-in-law Dorothy Jean Nyberg of Lake Placid, FL, and Isabel (Dutkiewicz) Urbanowski (John) of La Salle. George was preceded in death by sisters Margaret (Herbert) Wiedemann, Ardell (Philip) Shortell, Opal (Kenneth) Van Borg, Mildred (Richard) Soucie, and brother Nicholas G. Weber (Dorothy Jean Reichert-Nyberg) and daughter-in-law Karen (Wisgoski) Weber (Nicholas). Mass of Christian Burial will be 10:00 AM Saturday in St Valentine Church. Monsignor J.Brian Rejsek will officiate; Burial will be at a later date in St Valentine Cemetery. Visitation will be Friday from 5-8 PM in The Ptak Funeral Home, with a 7:00 PM Prayer Service. An additional Visitation will be Saturday morning in the church from 9:00 AM till time of services. In lieu of flowers and plants please consider donating towards special memorials to be determined later at Saint Valentine’s Catholic Church in Peru, IL or Immanuel’s United Church of Christ in Papineau, IL, or towards donating a motorized senior cart to the YMCA in Peru in memory of George R. Weber.
To order memorial trees or send flowers to the family in memory of George Richard Weber, please visit our flower store.