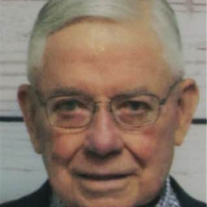 Harold K. Helwig 87 of Peru. Died August 10, 2019 at St Joseph Medical Center Joliet. Services will be 5:00 PM Monday August 19, 2019 at Lighthouse Baptist Church, La Salle. Pastor Aaron Butts will officiate. Burial will be at a later date in Slippery Rock Cemetery in Slippery Rock, PA. Visitation will be Monday August 19,2019 from 3-5 PM at Lighthouse Baptist Church . Ptak Funeral Home has been entrusted with the arrangements. Harold was born July 14, 1932 in Oakmont, PA. to William and Mabel (Singhose) Helwig. He married Dorothy Ifft on April 17,1954 in Franklin, PA. He graduated from Oakmont High School and attended Penn State University and the University of Pittsburgh. Harold worked as a construction supervisor and project manager for many years with Bechtel Corporation. Harold’s work took him and his family throughout America at places such as Cape Canaveral in Florida during the Titan and Saturn missile launches, the Kennecott Copper Mine in Bingham Canyon, Utah, which was the world’s largest open pit copper mine. He also was one of the original seven employees sent to Three Mile Island shortly after the accident, to assist with recovery. He worked on eight different nuclear, gas, and fossil plants around America. He was a mechanical piping / pump troubleshooter for Bechtel. Harold was the President of two general contracting companies in New England: RAM Structures and Eastern Building Systems. Harold proudly served in the US Navy during the Korean War. He was a radioman on the USS Carpellotti destroyer. Harold was an avid historian on battles and wars. He was also known for sharing his life stories, experiences and travels. Harold enjoyed woodworking, antiquing, skiing, bowling and was an avid trumpet player. Harold attended Lighthouse Baptist Church in LaSalle. After retirement he became an antique dealer. Harold was known as “Grampy” to his family and friends. He loved dining out at local restaurants, especially Seneca’s Oak Ridge and “Berverchi’s” aka. Verucchi’s. Harold is survived by his daughter Susan (Norman) Reno of Phoenix, AZ and his son Michael (Eileen) Helwig of Peru. Two Grandchildren Sarah (Tyrell) Dawson of Pueblo, CO. and Cody (Katie) Helwig of Jackson, WY Harold was preceded in death by his wife Dorothy in 2017 and 1 brother in infancy. Pallbearers will be Michael Helwig, Cody Helwig, Norman Reno and Tyrell Dawson. Memorials may be directed to the Shriner’s Hospital for Children of Chicago or the Disabled American Veterans (DAV).
To order memorial trees or send flowers to the family in memory of Harold K. Helwig, please visit our flower store.