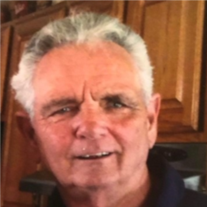 James Francis Lucas 76 of Peru. Passed away unexpectedly Saturday, January 5, 2019, in his home. Memorial Mass will be 11:00 AM Tuesday, January 15, 2019, at St Valentine Church. Monsignor Richard Soseman will officiate. The Peru Veteran’s Memorial Group Will Conduct Military Honors following the services at the Church. Burial will be at Calvary Cemetery in Arlington. Cremation rites have been accorded. Visitation will be Tuesday Morning in the Church from 9:00 AM till the time of services. Ptak Funeral Home has been entrusted with the arrangements. James was born August 11, 1942, in Peoria. He was raised by Frank and Margaret (Cassiday) Lucas. He married Nancy Schubert August 8, 1964, at St Mary’s Church in Tiskilwa. James served in the Navy during the Cuban Crisis. He served from 1960-1963. His rank was 2nd Class Petty Officer. James was an avid sports fan. Nothing gave him more pleasure than watching his grandkids sports activities. He was always there pushing them to excel in whatever they were doing. He was a big Chicago Bears fan and Nascar driver Kevin Harvick. He worked for FW Meens which later was called Aramark for 30 years. He then worked for PDQ Logistics until his retirement. He enjoyed playing cards with his grandchildren. He was a fan of the Band Fleetwood Mac and the song “The Great Pretender” by the Platters. James is survived by his wife Nancy of Peru. His 2 daughters Tara Lucas- Engstrom of Glen Ellyn, IL, and Tina Lucas- Weiden of San Diego, CA. His Grandchildren Conrad, Cory, Skyler and Sawyer Weiden. Kyle, Jameson and Addison Engstrom. He was preceded in death by his parents. 1 daughter Colleen Ann in infancy. 1 sister Loretta Cassiday Brown Memorial may be directed to the Diabetes Foundation.
To order memorial trees or send flowers to the family in memory of James F. Lucas, please visit our flower store.