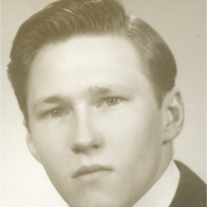 John F. Helson 89 of Peru. Died 9:45 PM December 26, 2016 in his home. Cremations rites will be accorded. A Memorial service will be at 6:00 PM Friday December 30 at the Kingdom Hall of Jehovah’s Witnesses in Peru. Burdette Mills will officiate. Ptak Funeral Home is assisting the family with the arrangements. John was born September 16, 1926 in St Joseph, Michigan to Peter and Mabel (McCoy) Helson. He married Janet Foster December 17, 1949 in Chicago. He retired from Nicor Gas Company. He was a member of the Kingdom Hall of Jehovah’s Witnesses. John is survived by his daughter Deanna Zanaglia of Peru. His four grandchildren Cory Helson, Aaron Helson, Shaun Helson and Matthew Helson. 2 Great Grandchildren Levi and Cooper Helson. John was preceded in death by his wife in 2014 and his son David in 2016.
To order memorial trees or send flowers to the family in memory of John F. Helson, please visit our flower store.