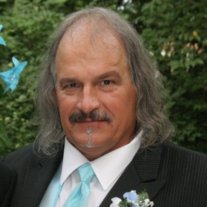 John W. Spayer 57 of Pontiac, formerly of La Salle. Died 7:49 am September 19, 2013 in his home. Memorial visitation will be Monday September 30, 2013 from 4-7 pm at Ptak Funeral home with a 7:00 pm Prayer service. Cremation rites have been accorded. Ptak funeral Home is assisting the family with the arrangements. Burial will be private. John was born May 9, 1956 in La Salle to Eugene and Joanne (Hrovat) Spayer. John retired from Caterpillar in April of 2013 after 32 ½ years of service, He was a machinist, assembler and charter member of local # 2096. His hobbies included anything mechanical- building motorcycles, cars and trucks. One of John’s greatest accomplishments was the legacy that he created through his electrifying, magnetic and captivating personality. It’s with this that his life and legacy will live on in immortality through the hearts, minds and memories of his friends and family. He was a member of the UAW and former member of Blood, Sweat and Gears. Survivors include his mother Joanne of La Salle, 2 sons Curt (Ashley) Spayer of La Salle and Todd (Denise Ekstam) Spayer of Oglesby. 2Grandchildren Lyndin and Elijah David Spayer. 1 Brother Terry (Carol) Spayer of Peoria and his former wife Karen Rogowski of Utica. Preceded in death by his father Eugene.
To order memorial trees or send flowers to the family in memory of John W. Spayer, please visit our flower store.