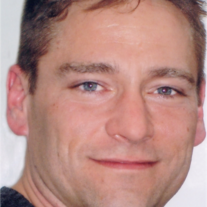 Jon Gestl, 51, of Chicago, a Certified Registered Nurse Anesthetist, died in his sleep on Tuesday, June 5, 2019, in Peru, IL. Born in Garfield Heights, Ohio, on Aug. 30, 1967, he lived his life according to the Winston Churchill quote, “Never, never, never give up.” Jon earned a BA in Psychology from Bowling Green State University in Ohio in 1989. He worked as a drug and alcohol counselor in Sandusky until he moved to Chicago in 1994 where he continued to work in social services. An avid fitness enthusiast, Jon worked as a fitness instructor and personal trainer in Chicago at the Sweat Shop, Crunch, and most recently Equinox. He won awards in national aerobics competitions before starting nursing school at Truman College in 2006. When Jon graduated in 2008, he worked as a Registered Nurse in the Surgical/Trauma Intensive Care Unit at Advocate Illinois Masonic Medical Center. During his time at Illinois Masonic, he returned to school and earned a BSN in Nursing from Purdue University Calumet in November 2013. Jon’s quest for knowledge and love of academics led him to Rosalind Franklin University of Medicine and Science where he was elected class president and received a Master of Science in Nurse Anesthesia in 2017. At the time of his passing, Jon was a CRNA at Illinois Valley Anesthesia Associates and worked at Illinois Valley Community Hospital in Peru. He was active in the Illinois Association of Nurse Anesthetists and lobbied tirelessly for equitable healthcare and CRNA full practice authority. He was in the process of completing a Doctorate of Nursing Practice, Nurse Anesthesia at Rosalind Franklin. Jon loved politics, gourmet cooking, international travel, and rock hits from the ‘70s. An avid reader, he loved getting lost in a book. Jon is survived by his partner Robert Scharringhausen and Miniature Dachshunds RJ and Stella; sisters Joan Stewart of Port Washington, Wis.; Lois Heinlen (Jerry) of Delaware, Ohio; and Elaine Grassbaugh of Columbus, Ohio; niece Kathryn Howell (Scott) of Norwalk, Ohio; and nephew Timothy Heinlen (Sallie) of Delaware, Ohio. Great uncle to Lillian and Alena Howell, and Savannah Heinlen. Jon was preceded in death by his parents, John and Eleanor Gestl. Services will be at 1 p.m. Saturday, June 22, at Rosehill Cemetery, 5800 N. Ravenswood Ave., Chicago, followed by a reception at Robert and Jon’s home. The family suggests memorial contributions to the Illinois CRNA PAC, 100 E. Washington St., Springfield, IL 62701. http://www.ilcrna.com/ILCRNA/Jon_Gestl_Memorial_Page.aspx . Ptak Funeral Home is assisting the family with the arrangements.
To order memorial trees or send flowers to the family in memory of Jon P. Gestl, please visit our flower store.