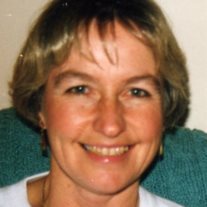 She was an award winning pie baker at age 24. She touched the lives of hundreds of children as a grade school teacher and youth group leader. She was a loving and devoted wife and mother. And her smiling, friendly, freckled face told you she led a life of joy and happiness, which she freely shared with everyone she met. Kathy Ann Hornbaker of rural Princeton was born on March 13, 1952, in Jacksonville, Illinois, to Earl and Eileen Niestradt. She married Rich Hornbaker in 1973. She graduated from Bushnell Prairie City High School in 1970, and from Illinois State University in 1975, and taught at Leepertown Grade School and Tiskilwa Grade School prior to starting a family. Kathy and Rich established Hornbaker Gardens in 1987. That same year, Kathy began homeschooling their three children, and did so for six years. She was active in Hampshire Colony Church, and then Open Prairie United Church of Christ, where she was a youth group leader for many years. Kathy was also a member of the Princeton chapter of P.E.O. Kathy died at the age of 62, on August 11, 2014, at Cabin Livin’ in rural Hennepin, Illinois, surrounded by her loved ones. Surviving are her parents, Earl and Eileen Niestradt, of Bushnell, Illinois; her husband, Rich, of Princeton; three children, Sara (Mike) Tracey of Normal, Illinois, Molly (Russ) Blogg of Princeton, and David (Laura Marek) Hornbaker of Princeton; two grandchildren, Caleb and Addison Tracey; four siblings, Jim (Gayle) Niestradt of Cincinnati, Ohio, Bob (Kathy) Niestradt of Shelbyville, Illinois, Dan Niestradt of Lake Oswego, Oregon, and Janet (Andy) Schoneman of Western Springs, Illinois, and numerous nieces and nephews. She was preceded in death by a daughter, Rebecca, who was stillborn in 1980. Cremation rites will be accorded. Visitation will be Friday, August 22, from 5:00 p.m. to 8:00 p.m. at Hornbaker Gardens, and a memorial service will be held the following day, Saturday, August 23 at 4:00 p.m., also at Hornbaker Gardens. The family asks that, in lieu of flowers, memorial donations be directed to Open Prairie Church in Princeton to be used for youth activities and education, or to Princeton Public Library for the children’s library.
To order memorial trees or send flowers to the family in memory of Kathy Ann Hornbaker, please visit our flower store.