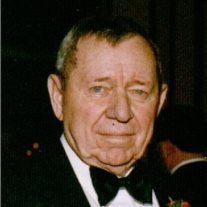 Laverne "Buck" Morel 93 of La Salle. Died 6:00 PM September 5, 2014 at La Salle Heritage Health. Memorial services For Buck and his wife Margaret, who died March 24, 2014 will be September 19 12:00 PM in Ptak funeral Home Rev Paul Meismer will officiate. Burial of the urns will be in St Vincent Cemetery. The La Salle-Oglesby Memorial Group will perform grave side services. Memorial Visitation for both Buck and Margaret will be Friday September 19 from 10:00 AM till time of services. Laverne was born October 24, 1920 in Princeton, IL to Arthur and Janet (Nelson) Morel. He was a 1938 graduate of Princeton High School. He married Margaret Pelkey January 17, 1942 in Canton, Ohio. Margaret passed away March 24, 2014. Buck worked in Sales and Sales Management for Leber Brothers Company of Pittsburgh up till his retirement. Buck served in the 1st Marine Division during WWII, serving in the South Pacific Theatre. He participated in the Battle of Tarawa and Peleliu, two of the bitterest battles in the South Pacific. Laverne is survived by 3 daughters Jan Armstrong of La Salle, Jill (Keith) Vasquez of La Salle, Jo E Morel of Santa Cruz, CA. 2 sons James (Sherry) Morel of Mt Carroll, IL and Jay of LaSalle. 8 Grandchildren Tom Morel, Kaleen Barbera and Marques Morel, Nikki Merrick, Nathan and Luke Armstrong, Michelle Morel and Jo E. Vasquez. 13 Great Grandchildren. He was preceded in death by his wife Margaret in March 24, 2014, 2 brothers Richard and Max. Memorials may be directed to Illinois Valley PADS
To order memorial trees or send flowers to the family in memory of Leverne Buck Morel, please visit our flower store.