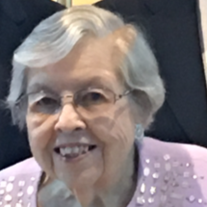 Mary L. Sadowski, 92, formerly of Peru, slipped peacefully away to her heavenly reward on the morning of June 5, 2016, in Aurora, Illinois, where she had been living with her daughter and son-in-law since May 2012. The family will receive visitors at 10:00AM on June 8 at Annunciation of the Blessed Virgin Mary Catholic Church in Aurora, with funeral services at 11:00AM. Another reception of visitors will be from 3:00-4:00 PM that afternoon at Ptak Funeral Home in Peru, Illinois, with a prayer service at 4:00PM, before she will be laid to rest in St. Valentine Cemetery. The former Mary O’Rourke was born on March 4, 1924 to John and Elizabeth O’Rourke. She married Frank Sadowski of Peru on July 17, 1954 in St. Patrick’s Catholic Church in Amboy, Illinois. They celebrated fifty years of marriage in 2004, before Frank’s passing later that year. She retired in 1989 from PQ Corporation in Utica, where she had worked for 18 years. She had previously worked at Westclox and for the LaSalle County Coroner after beginning her career at the Lee County Farm Bureau. An avid singer, Mary was always active in her church life. She sang with the Harmonaires for years, and founded funeral choirs at St. Valentine and Annunciation. She was also a founding member of the Family Circle at St. Valentine and scheduled the extraordinary ministers there for years. She was a member of the Catholic Daughters of America and the VFW Auxiliary. Mary is survived by her three children, Mark (Jill) Sadowski of Farmer’s Branch, Texas, Patricia Sadowski- Doctor (Gary Chomko) of Aurora, Illinois, and Dean Sadowski of Westchester County, New York; six grandchildren, and three great grandchildren. She is survived by her sister Patricia Becker of Orange County, California Mary was preceded in death by her beloved Frank, her parents, and her son-in-law Randall Doctor. In lieu of flowers, the family would welcome donations in Mary’s name to St. Bede Academy of Peru, Illinois or Annunciation Church in Aurora, Illinois.
To order memorial trees or send flowers to the family in memory of Mary L. Sadowski, please visit our flower store.