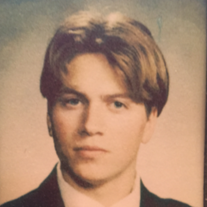 Michael L. Ptak 39 of Oglesby. Died August 26, 2017, in Kindred Hospital (Chicago) Northlake following a lengthy illness. Funeral services will be 12:00 PM Friday in Ptak funeral Home. Abbot Philip Davey OSB will officiate. Cremation rites will take place following the services. Burial will be in Peru City Cemetery at a later date . Visitation will be Friday in the funeral home from 10:00 AM until time of services. Michael was born May 14, 1978, to Louis M. “Mike” and Nancy (Schlingman) Ptak. He was a 1996 graduate of St Bede Academy. He studied network Communications at Western Governors University. He played Baseball at St Bede Academy and played various men’s Hardball Leagues in the area. Michael was an avid White Sox and Chicago Bears fan. He loved playing his guitar and fishing with his family. Michael is survived by his mother Nancy of Oglesby, 1 sister Kimberly (Shawn) Hill of Bloomington, IL, 1 brother Clayton (Brandi) Ptak of St Louis, MO. His 2 nieces Natalie and Madison and Several aunts and Uncles. Michael was preceded in death by his Father Mike in 2016, 2 Uncles and 2 cousins. His paternal and maternal Grandparents.
To order memorial trees or send flowers to the family in memory of Michael L. Ptak, please visit our flower store.