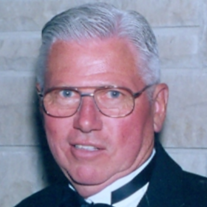 Nicholas “Nick” Donahue Nicholas W. Donahue, 81 of Peru, passed away February 23, at 2:06 PM in St. Francis Medical Center, Peoria, IL. A Mass of Christian burial will be at noon Saturday in St. Valentine’s Church, Peru. Monsignor J. Brian Rejsek will officiate. Burial will be at St Columba Cemetery in Ottawa. Full Military honors will be accorded by members of Ottawa Veterans Group. Visitation will be 9-12 PM Saturday in the Church. Arrangements are entrusted to Ptak Funeral Home in Peru. Nick was born October 28, 1934, in Ottawa to John J. and Anne (Clark) Donahue. He married Marylyn Dornis on April 27, 1957 in St. Francis Church in Ottawa. Nick worked 43 years until his retirement for Illinois Power as an Electrical Meter Foreman. He also was the Sexton for St. Valentine Cemetery in Spring Valley for 20 years. Nick could also be seen at the church doing whatever needed to be done. He was a member of St. Valentine’s Church, served on the Parish Council. He served on the Peru Catholic School Board, Vice- President of Peru Boys Baseball Board and was treasurer of the Bedan Club at St. Bede for 25 years. It doesn’t stop; He was a member of Local 51 IBEW, Lifetime Member of the Knight of Columbus council #634 in Ottawa. He was the treasurer of Utility Employees LaSalle Service Area Credit Union for over 40 years. He served in the United States Army from 1957-1959. Nick is survived by his wife, Marylyn, daughter Joan (Leon) McKinney of Town and Country, MO; 5 sons, Nick (Raye-lynn) of Pompano Beach, FL; Dan (Renee) of Plainfield; Jim (Mindy) of Plainfield; Keith (Samantha) of Bloomington and John (Laura) of Lake Barrington; 11 grandchildren, Nathan, Eric, Brett and Colin Donahue; Bridget McKinney; Emma Petinga; Brandi, Lexi, Morgan, Harper and Maggie Donahue, 2 brothers Tom (Emma) Donahue of Ottawa and Earl (Phyllis) Donahue of Serena; 3 sisters, Ivis (Robert) McGrath of Ottawa; Mary Schaibley of Ottawa, and Josephine (William) Parrott of Ottawa and many nieces and nephews. Nick was preceded in death by his parents, 2 brothers John and Francis and one sister Claire Rohlman. In lieu of flowers, memorials may be directed to St. Bede Academy, Marquette Academy or St. Valentine’s Church. Online condolences may be left at PtakFH.com
To order memorial trees or send flowers to the family in memory of Nick W Donahue, please visit our flower store.