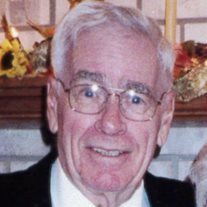 Paul J. “Kobbie” Kobbemann 87 of Peru. Died 3:02 PM September 30, 2014 in Manor Court of Peru. Mass of Christian Burial will be Saturday 11:00 AM at St Valentine Church. Msgr. Brian Rejsek will officiate. Burial will be Private at a later date in St Valentine Cemetery. The Peru Veterans Memorial Group will conduct a flag folding service following the mass. Visitation will be Saturday in the church from 9:00 AM till time of services. Ptak Funeral Home is assisting the family with the arrangements. Paul was born March 31, 1927 in Peru to Albert and Myrtle (Erbes) Kobbemann. He was Veteran of WW II, serving in the Navy in the Pacific Theatre of Operations. He married Irene “Cissie” Prosinski June 24, 1950 at St Valentine Church. He worked at Chapman’s Mechanical in Peru and then became a letter Carrier for United States Post Office for many years, up till his retirement. He enjoyed many years of traveling with his wife. He was a member of St Valentine Church, Oglesby American Legion, Knights of Columbus Calvert Council and a longtime member of Deer Park Country Club. He is survived by his brother in law Henry (Joyce) Prosinski of Peru. 4 nieces Sharon (Lavern) Schultz of Ohio, IL, Peggy (Dan) Overton of Naperville, IL, Ann (Michael) Riva of Peru and Amy Golightly of Peru and 1 nephew Michael (Kathy) Prosinski of Peru. Several Great and Great- Great Nieces and Nephews. Paul was preceded in death by his wife Irene in 2002 and 1 sister Arlene Lundberg.Pallbearers will be Michael Prosinski, Michael, Adam and Alex Riva, Mike Dougherty, Dan Overton and Lavern Schultz. Memorials may be directed to the IVCIL or the Local Food Pantry. Online condolences and remembrances may be shared at PtakFH.com
To order memorial trees or send flowers to the family in memory of Paul J. "Kobbie" Kobbemann, please visit our flower store.