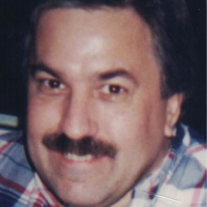 Richard G. Chandler 65 of Peru. Died February 19, 2020, in his home, following an extended illness. Funeral Services will be 2:00 PM Saturday, February 22 at Grace United Methodist Church La Salle. Pastor Brett Todd will officiate. Cremation rites will follow the services. Burial will be at later date in Forest Lawn Memory Gardens La Salle. Visitation will be Saturday in the church from 1:00 -2:00 PM. Ptak Funeral Home is handling the arrangements. Richard was born July 27, 1954, in La Salle to Glenn and Tabitha (Kuehl) Chandler. He was a machinist at Sundstrand in La Salle for over 28 years. He was a 1974 graduate of La Salle- Peru Township High School. Richard was a member of Grace United Church and IV Street Machine Car Club. He especially loved Mopar. Richard is survived by his mother Tabitha of Peru. 2 daughters Heather (Dan) Turczyn of Spring Valley and Melissa Chandler of La Salle. 1 son Matthew Chandler of La Salle. 3 Grandchildren Megan Sharp, Tabitha Sharp, and Gage Sharpe and 1 brother Jeffrey (Marlene) Chandler of Peru. Richard was preceded in death by his Father Glenn in 1979 and his sister Susan in 2015.
To order memorial trees or send flowers to the family in memory of Richard G. Chandler, please visit our flower store.