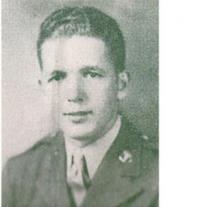 Robert M. Kramarsic 95 of La Salle. Died 1:21 AM March 21 in La Salle Veterans Home. Services will be 11:00 AM Tuesday in the Ptak Funeral Home in Peru. The Very Rev Antonio Dittmer will officiate. Burial will follow in St Vincent Cemetery La Salle. The La Salle-Oglesby Veterans Memorial Group will conduct a flag folding Service. Visitation will be Tuesday morning from 10:00 AM till time of services in the funeral home. Robert was born February 2 1920 in La Salle to Sylvester and Mary (Janko) Kramarsic. He retired from Westclox. He was an Army veteran of World War II, serving overseas in Asiatic-Pacific Theater, where he received 3 Bronze Battle Stars and participated in the Philippine Liberation Theater where he received a Bronze Battle Star. He is survived by a sister in law Vera Kramarsic of La Salle, several nieces and Nephews and Great nieces and Nephews. He was preceded in death by 5 sisters Mary, Ann, Antoinette, Paula and Virginia. 5 Brothers Joe, Ray, Edward, August and Don
To order memorial trees or send flowers to the family in memory of Robert M, Kramarsic, please visit our flower store.