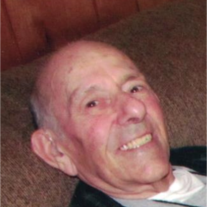 Ronald A. Destri 84 of Peru. Died April 20, 2016 in La Salle County Nursing Home Ottawa. Memorial Mass will be 12:00 PM Saturday April 30, 2016 at St Joseph Church Peru. Cremation rites have been accorded. Burial of the Urn will be at Forest Lawn Memory Gardens in La Salle. The Spring Valley American Legion will conduct a Flag folding service. Memorial Visitation will be Saturday morning in the church from 10:00 AM till time of services. Ptak Funeral Home has been entrusted with the services. Ronald was born May 6, 1931 in DePue to Fred and Kathryn (Marchetti) Destri. He was a 1949 Graduate of Hall Township High School. He married Donna Janz September 18, 1954 at St Valentine Church. Ronald served US Air Force from 1951-1955. Ronald worked as a toolmaker at Westclox for 30 years and then worked at Caterpillar in Pontiac for 11 years. He was a member of St Joseph Church, Spring Valley American Legion and the Die Hard Cub Fan Club. He was an avid Hunter and Fishermen. Along with his grandson Jeff, Ronald was a huge Cub fan. Ronald and his wife spent many winters in sunny Arizona. Ronald was 2 term 3rd ward alderman for the city of Peru from 1973-1981. He also volunteered for the Red Coats at IVCH for many years. Ronald is survived by his wife Donna of Peru. 1 daughter Susan (Destri) Doyle of Peru. 2 sons Steven Destri of Normal, IL and Timothy (Nicole) Destri of Slidell, Louisiana. 3 Grandchildren Matt, Jeff and Katie Doyle and 1 Great Granddaughter Evelyn. 1 sister Joanne (Leonard) Monterastelli of Peru. 2 brothers Robert (Teryl) Destri of Spring Valley and Gary (Lisa) Destri of Webster Park Spring Valley. Several cousins, Nieces and nephews. Honorary pallbearers will be Steven Destri, Timothy Destri, Bob Destri, Matt Doyle and Jeff Doyle. He was preceded in death by his parents Memorials may be directed to IVAR or the Donor’s choice.
To order memorial trees or send flowers to the family in memory of Ronald A. Destri, please visit our flower store.