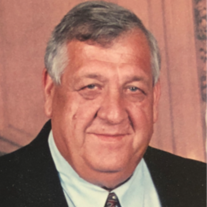 Ronald F. “Koko” Kulpa 82 of Oglesby . Died September 1, 2018 in Heritage Healthcare Peru. Mass of Christian Burial will be Wednesday 10:00 am in Holy Family Church Oglesby. The Rev Gary Blake will officiate. Abbot Philip Davey OSB and Rev Gregory Jarzombek OSB will concelebrate. Burial will be at a later date in St Hyacinth Cemetery. Cremation rites will follow the services. Visitation will be Tuesday from 5-7 PM in the Ptak funeral home. Ronald was born December 18, 1935, in Peru, Il to Frank “Speedo” and Julia (Hobneck) Kulpa. He married Carol Bokuniewicz November 29,1958, in Holy Family Church Oglesby. Ronald was a 1954 graduate of St Bede Academy and attended LPO Junior College. He worked at LTV Steel for over 32 years, retiring over 20 years ago. He was a member of Holy Family Church, Oglesby Elks and the St Bede Hall of Fame. Koko was an avid St Louis Cardinal, Chicago Bears, and St Bede Academy Sports fan. Ron is survived by his wife Carol of Oglesby. 1 daughter Kim (Ron) Groleau of Peru and his son Jeff Kulpa of Oglesby. He also survived by his grandson Brad Groleau of Omaha, NE and his brother John (Marlyn) Kulpa of Lostant. He was preceded in death by his sister Sissy Gum and brother Bill Kulpa. Memorials may be directed to St Bede Academy
To order memorial trees or send flowers to the family in memory of Ronald F. "Koko" Kulpa, please visit our flower store.