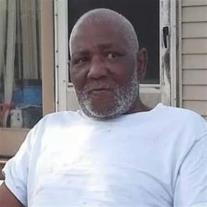 Simon Lester Epps 67 of Spring Valley. Died 12:17 AM November 9, 2014 in his home, following an extended illness. Services will be Friday 7:00 PM in the Ptak Funeral home. Rev Betty Delgado will officiate. Cremation rites will follow the services. Visitation will be Friday from 5-7 PM in the funeral home. Arrangements have been entrusted to Ptak Funeral Home. Simon was born August 2, 1947 in Springfield, KY to Robert M. and Effie (Hagan) Epps. He married Marjorie Theobald March 15, 1977. He was a heavy machine operator for Illinois Cement Co. for 32 years, up till his retirement. Simon is survived by his wife Marjorie of Spring Valley, 2 daughters Megan (Bobby Phillips) Theobald-Epps of Spring Valley. Simone (Robert Phifer) Epps of Spring Valley. 3 Grandchildren Tyvon, Tianna and Tilea. 1 sister Georgia Mae Logan of New Jersey and 1 brother Robert Epps of Lebanon, KY. He is also survived by his extended family and several friends. He was preceded in death by his grandson Aaron Phillips
To order memorial trees or send flowers to the family in memory of Simon Lester Epps, please visit our flower store.