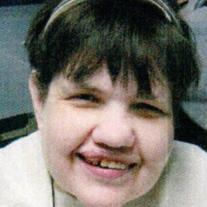 Susan J. Chandler 62 of Peru. Died September 2, 2015 in Arba Care Center (formerly Asta Care Center) in Toluca. Services will be Tuesday September 8 2:00 PM in the Grace United Methodist Church in La Salle. Pastor Brett Todd will officiate. Burial will be at a later date in Forest Lawn Memory Gardens La Salle. Visitation will be Tuesday in the church from 1:00 PM till time of services. Ptak Funeral Home is assisting the family with the arrangements. Susan was born May 24, 1953 in La Salle to Glenn and Tabitha (Kuehl) Chandler. She attended the Lighted Way of La Salle. She worked at the Horizon Industries in Peru. She was a member of Grace United Methodist Church in La Salle. Susan is survived by her mother Tabitha of Peru. 2 brothers Richard Chandler of La Salle and Jeffrey (Marlene) Chandler of Peru. She is also survived by 3 nieces and 1 nephew. She was preceded in death by her father in 1979.
To order memorial trees or send flowers to the family in memory of Susan J. Chandler, please visit our flower store.