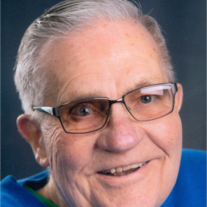 Thomas J. Kujawa 85 of Peru. Died December10, 2019 in the Veteran’s Home La Salle. Mass of Christian Burial will be Saturday 11:00 AM at St Valentine Church. Monsignor Richard Soseman and Rev Gregory Jarzombek OSB will Con Celebrate. Burial will be at St Valentine Cemetery. The Peru Veterans Memorial Group will conduct military honors. Visitation will be Saturday morning from 9:00 -11:00 AM in the church. Ptak Funeral Home is handling the arrangements. Thomas was born June 14,1934 in La Salle to Thomas and Lottie (Pierzchalla) Kujawa. Tom graduated from St Valentine Grade School and La Salle-Peru Township High School. After High School Tom worked at Westclox for one year and then moved to Huron, South Dakota. He attended Huron University and graduated from St John’s Regional Medical School of Nursing becoming Registered Nurse. After much experience in Healthcare he enrolled in a graduate program in Anesthesia Nursing at Sacred Heart Hospital in Yankton, South Dakota and became a Certified Registered Nurse Anesthetist. He practiced anesthesia in South Dakota, Illinois, Texas and Georgia. Tom served as a captain in the Army during the Vietnam war, administering anesthesia to the wounded that were triaged from Vietnam to Camp Gordon, GA. He considered this to be the greatest experience. After discharge from the military Tom took a position at St Francis Hospital Peoria where he worked for 35 years for both St Francis and Associated Anesthesiology Group. During this time Tom also attended St Francis University in Joliet receiving a BS. Tom was a member of St Valentine Church, the American Association of Nurse Anesthetist’s (Retired Status). He was also a member of the Polish National Alliance, Catholic Order of Foresters, La Salle Knights of Columbus and Peru Post 792 American Legion. Tom was also a professed Secular Franciscan of the Sacred Heart Fraternity, Peoria Il for 30 Years. Tom is survived by his sister Mary Jane Grandadam of Ottawa and nieces and nephews James (Diana) Lesczcynski of Bloomington, Il, Susan (Dr Wilson) Movic of Bloomington, Il., Jeffrey Leszczynski of La Salle, Greg Leszczynski of Clearwater, FL, Mary Beth (Anthony) Loebach of Bloomington, Thomas Leszczynski of La Salle. Great Nieces Sarah (Bryan) Gordon and Adria (Jerard) Lopez of California. Great nephews Andrew and Logan Leszczynski and many Great-Great Nieces and Nephews and cousins. He was preceded in death by his parents and his Twin sister Arlene Grace in infancy. The family has asked that a donation of a pint of blood be made to the Red Cross or a donation to Pro Life in his name.
To order memorial trees or send flowers to the family in memory of Thomas Kujawa, please visit our flower store.